A group of schoolchildren have been praised for their efforts after organising a litter pick in Exeter.

The youngsters from Alphington Primary School gave up their Saturday to tidy up their neighbourhood.

Cllr David Harvey, Lead Councillor for City Management, described the youngsters as “environmental champions” and encouraged others to follow their lead.

The youngsters picked up enough litter to fill three big bags plus a box full of sharp edges.

“This is a fantastic effort from a group of community spirited youngsters,” said Cllr Harvey.

“I have nothing but admiration for determination to tidy up their neighbourhood – to me they are environmental champions and I hope others around the city will follow their example.”

The litter pick was the idea of eight-year-old Emily Brezovska, who often uses sticks to pick up litter around Alphington.

“She never understood why some people are that lazy and disrespectful and leave rubbish on the ground,” said her Dad, Peter.

Emily said she wanted to organise a litter pick and with help from her Dad and local councillors, contacted the City Council to see if they could help out.

The Council were able to supply the children with high-visibility jackets, litter pickers, gloves and bags. 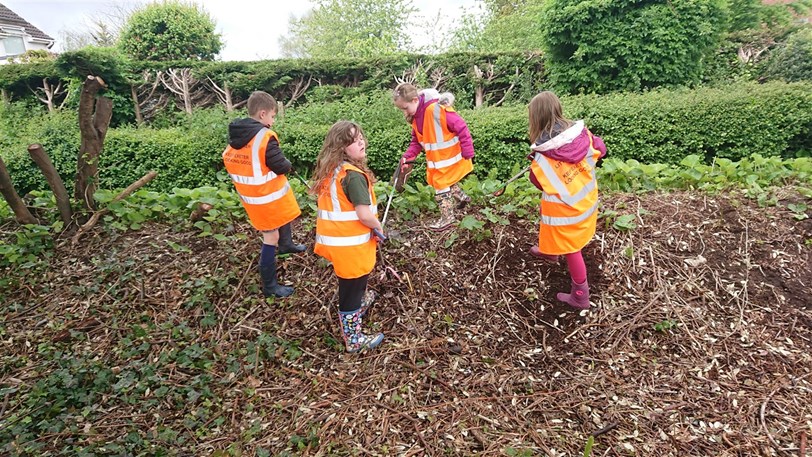 The children – ten classmates, plus sisters and four adults – gave up their Saturday to pick up litter from around Alphington, starting outside the primary school. They tidied Mill Lane, Chapel Road, Brookfield Gardens, Church Road and Ide Lane, stopping for a picnic lunch.

“It was brilliant to see how proud they were of themselves. We had a chat about it and everybody wants to do litter pick again. So we decided to do a litter pick next month again.

“I was very surprised with the massive, positive feedback from the Alphington community and a lot of people would like to be involve next time too. It's very positive.

“My daughter is very happy with this reaction and she realized that if we want to change something then we have to start from each other and inspire the others to join us. Everyone who was involved did a great job for the community, including Alphington Primary School who are doing incredible job and the kids are very happy there,” he added.

Anyone else who wants to do a community litter pick in Exeter can get in touch with the City Council on 01392 262633 and arrange to borrow the litter picking equipment.

How Exeter must play its part in tackling carbon emissions