On Sunday 29th December Geoffrey William Pyne celebrated his 100th Birthday at Exminster Golf Club together with his family and friends.  The Lord Mayor of Exeter, Councillor Peter Holland, presented Geoffrey with a card and gift on behalf of Exeter City Council and wider community.

Geoffrey was born in Goldsmith Street Heavitree in 1919. He left school at 14 to undertake a Plumbers and Pipe fitters Apprenticeship.  At the age of 18 he joined the Devon Yeomanry and was later to join the Ordnance Corp and then the Royal Electrical & Mechanical Engineers (R.E.M.E.) as part of the Anti-Tank Regiment landing on Sword Beach on D Day in 1944.

In spite of being injured in Belgium he returned to active service and fought all the way to Bremen. After the War Geoffrey returned to Exeter to work for his old employer – Down and Baker but later moved across to Exeter City Council where he was instrumental in re-instating the City’s Water Network following the Blitz and in particular the part of the City once known as Bedford Circus. 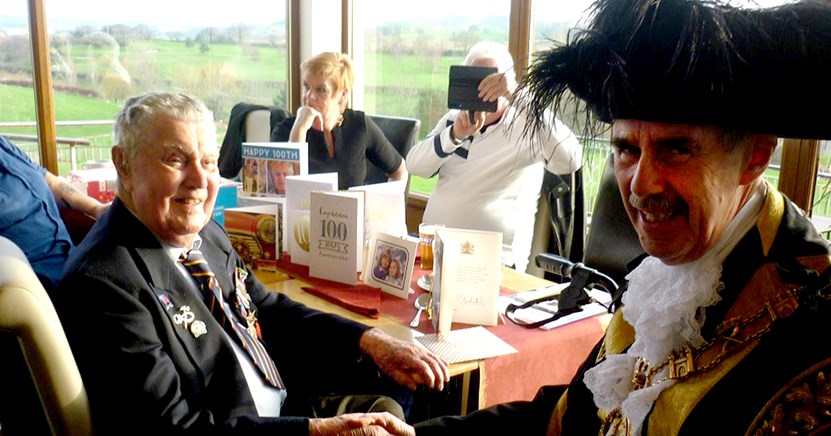 Geoffrey is likely the oldest surviving past member of staff of Exeter City Council and one of the few surviving soldiers who landed in France on D Day.

The Lord Mayor of Exeter, Councillor Peter Holland said "It was a privilege and honour to meet Geoffrey as he reached this amazing milestone in his life. As a country we have enjoyed 75 years of unbridled peace in Western Europe and it is my view that the campaign Geoffrey took part in enabled just that. What Geoffrey and his colleagues did was phenomenal. We owe a huge debt of gratitude to Geoffrey's generation who gave us the freedoms that we enjoy today.'