A popular park in Exeter is playing its part in helping a woman who wasn’t expected to survive beyond her early teens celebrate her 25th Birthday.

Heavitree Pleasure Ground has seen a ‘snake’ of painted stones laid down next to the tennis courts to celebrate Annie Pyne’s significant milestone. The stones are the work of Annie’s friends and family.

As a child, Annie was diagnosed with a rare degenerative disease. Doctors never expected her to reach the age of 20 but Annie has defied the odds and today celebrates her 25th Birthday.

Annie has Niemann-Pick disease, a cruel rare degenerative disease that slowly robs people of all the things they were once able to do.

She is one of only 140 known people in the country to have Niemann-Pick disease, and it is estimated there are just 2,000 families affected worldwide. It is often called ‘the childhood Alzheimer’s’, and those with it rarely live to see their teens.

The condition causes cholesterol to build-up in the neurons and there are three recognised forms; Type A, B and C. Annie, who lives near Woodbury, has Type C which means the brain and other organs are affected, leading to progressive intellectual decline, loss of motor skills, seizures and dementia.

Speech can become slurred and swallowing problems may develop. The rate at which the disease progresses varies greatly.

Up until the age of seven, Annie, was like any other child and enjoyed swimming, gymnastics and dancing. She was also doing really well at school.

Then all of a sudden she could not complete tasks she had been able to only days before.

Her mum Kait said: “Annie was fine when she was younger and growing up, and met all her milestones. She was very bright, cheerful and outgoing and then my husband Norman and I started noticing she was having problems with her school work.

“She had been a really good reader but was starting to struggle. We also noticed she was falling over sometimes and she would also keep asking me the same questions over and over again as if she had not remembered what I had said.

“A special needs teacher referred us to hospital. We saw a consultant who was puzzled by Annie’s change because it had happened quite quickly. It was quite upsetting to see her change like that.”

It took two years, due to the rarity of her condition, for Annie to be diagnosed with Niemann-Pick disease.

Kait said: “t was just such a shock and they said there was nothing they could do for her at this time.

Over the years, as predicted, Annie’s condition has gradually deteriorated, but to everyone’s surprise she not only made it to her teens but also her 20s.

Sadly she is now wheelchair bound and can’t do anything for herself so requires 24/7 care. She has limited speech, but is able to communicate using Makaton which uses signs together with speech and symbols.

However, Annie is looking forward to celebrating her 25th birthday.

Kait said: “She has done amazingly well considering we were told her life expectancy was her early teens. It’s heartbreaking to watch her get worse, but as we are with her all the time we don’t notice it as much.

"It only suddenly hits you when you look back at pictures from a few years ago and you can really see the change in her.

“I think her positive outlook has helped, and she has a lot of love and support around her.”

Lockdown was a particularly challenging time for Annie and her parents because they were unable to leave the house or be supported by her usual carers.

Kait recalled: “It was difficult as we needed to shield her as she is quite poorly. It was just my husband and I looking after her, whereas usually we would have a team of eight carers coming in through the week.

"She was also unable to go to CEDA in Exeter, which provides learning and social opportunities to disabled people in Devon.

“Annie went from having a very busy life to just being stuck at home with us. It was a shock for her, but we managed.

"We have got limited care back and she is also back at CEDA, and we just need to keep an eye on things.

“She doesn’t smile like she used to. She had a beautiful smile and that is heartbreaking. I don’t think it’s because she’s unhappy; I think she has lost the physical ability to smile.

Annie has already had a sneak preview of the stones. “She had a big smile when we took her to Heavitree park and she looked at all the beautiful stones which have been laid out to mark her birthday.” 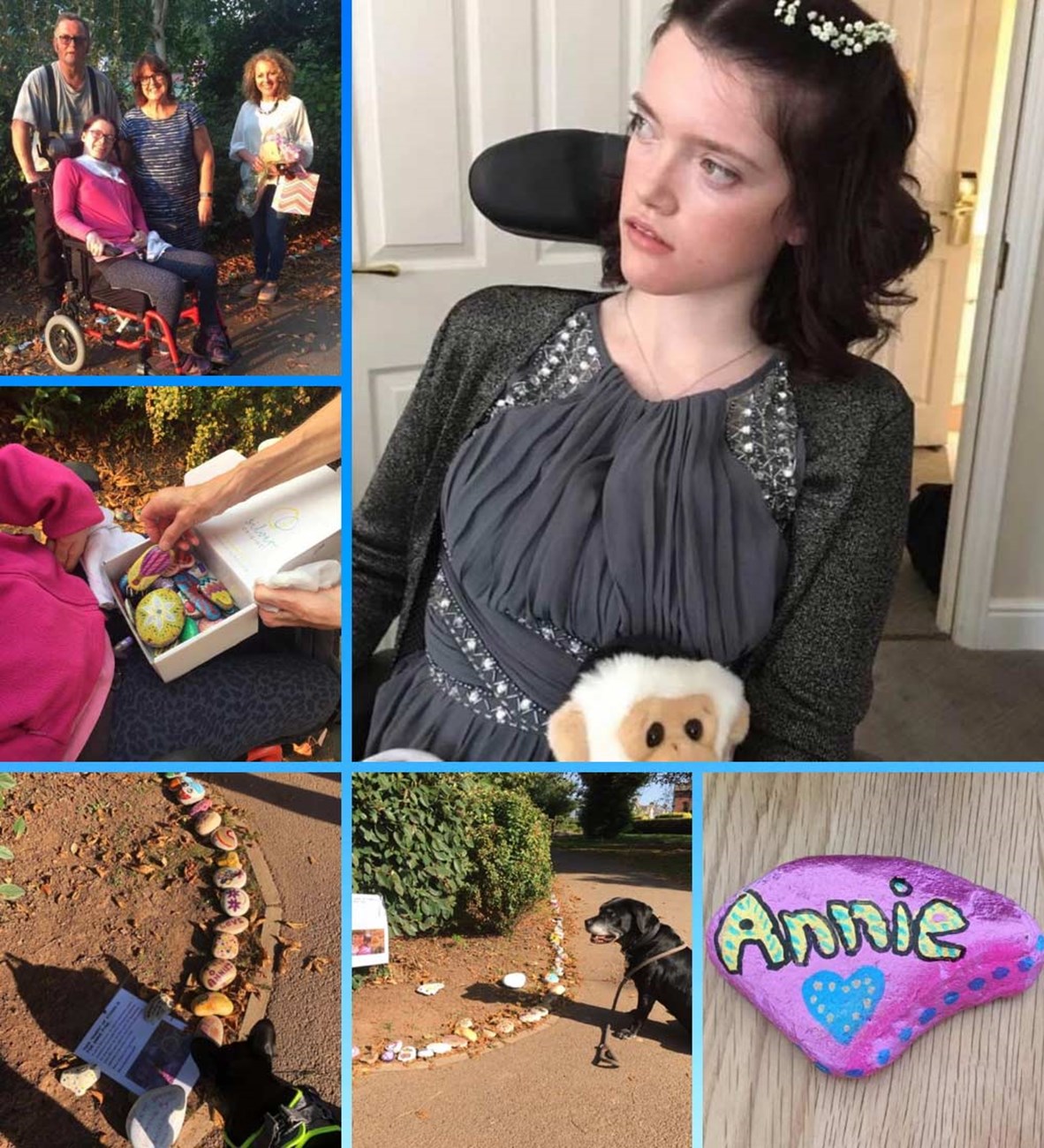 The ‘snake of stones’ was the idea of Kim Metters (pictured far right along with Annie and her mum and dad) . Kim’s daughter has been friends with Annie since they were 11 years old.

Last year, Kim created a stone painting group on Facebook as a birthday present for Annie called Annie’s Stones NP. The idea was that from the comfort of her home, Annie could see where the stones were being hidden and found again.

Not only has it succeeded in bringing joy to Annie and those who have been involved in painting, hiding and finding the stones, it is also raising awareness of the rare degenerative disease.The Facebook group has nearly reached just over 500 members in one year.

Around 260 painted stones have now been used to create a snake shape in Heavitree Pleasure Ground, which people are invited to add to.

Kim told the Council: “I chose Heavitree Park as I have happy memories of walking through the park as a child, but more importantly I wanted somewhere which was easily accessible for wheelchair users and where parking was close by for those people not able to walk far. That way, the stones could be seen by all ages and all abilities...something I feel is overlooked too often.”

The stones will remain in the park until the end of the month. After that, the family are hoping that people will then take a stone and rehide it so that when it is found it can be shared on Facebook to continue giving pleasure to Annie.

Kait, who is looking forward to celebrating Annie’s birthday and seeing her son Robert, 29, get married this month, said: “Birthdays are very special as each one is very precious.

"We feel very, very lucky that Annie is still with us as so many children we have seen with the disease have sadly not made it.”

Anyone who would like to add to the stone snake can paint a stone on one side and on the reverse paint # Annie’s Stones NP and post it on Facebook and hide or keep it.

Community Cash Up For Grabs