A new £300m vision to redevelop a key site in the centre of Exeter has been revealed by the City Council.

The development concept for Exeter Bus Station includes housing, offices, restaurants and retail, as well as the possibility of a new multi-use entertainment venue.

It would sit alongside the planned new state-of-the art Passivhaus leisure complex St Sidwell’s Point, and a new Exeter Bus Station, which are both being funded by the city council. 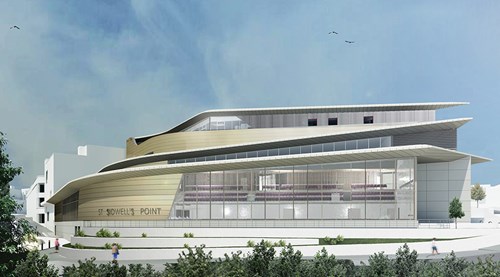 Details of the vision, which also includes the potential to relocate the Civic Centre to the site to free up space for much-needed new housing, will be discussed by the council’s Leisure Complex and Bus Station Programme Board next week.

The vision for the site includes:

The vision shows a pedestrianised Paris Street, which remains a long term aspiration for the authority.

Chief Executive and Growth Director Karime Hassan said: “The development concept provides a mix of uses that will complement the High Street, supporting both the daytime and night time economy, and responds to the demand for housing and offices within the city centre.

“This is a major and vital investment in a key site, adding almost a million square feet of additional development. Everyone knows the difficulties retail is facing. We need to ensure Exeter city centre is viable, sustainable and continues to thrive, and this investment is crucial for the city.”

A report for councillors reveals the previously approved budget to build the leisure complex and new bus station will need to increase. The authority has had to overcome challenges around access, site levels, the external cladding and appearance of the new leisure complex, as well as inflation.

Councillors will be asked to approve an additional budget of £11.88m to build the leisure complex and bus station and kick start the rest of the redevelopment at the site.

The authority has saved and ring fenced £33.65m - income from new homes bonus, community  infrastructure levy (CIL), Section 106 agreements and capital receipts for the purpose of delivering the leisure complex and bus station.

The additional funding can be achieved without negatively impacting on the medium term financial plan, and will not increase the council’s already identified saving requirements and commitments over the coming years, the report reveals.

This will be achieved through income from the leisure centre operator and financial management measures, including restructuring of council-wide repayments of debt.

Council leader Pete Edwards said: “Redeveloping this site has been a key priority for years and I am delighted that we are now in a position to move forward with a scheme that serves the needs of everyone who lives, works and visits the city – it includes leisure, health and fitness, much-needed housing, office space, restaurants and retail. These plans are very exciting for Exeter, and the new facilities are long overdue.”

Deputy Leader Rachel Sutton, Lead Councillor for Economy and Culture, welcomed the possibility of a new entertainment venue. She said: “A clear need for this facility in the city centre has been established. There would be some major obstacles to overcome to deliver a new performance venue – not least of which is funding. But the fact that a potential viable site has been identified to create a purpose-built facility is hugely exciting.”

Councillor Phil Bialyk, Portfolio Holder for Health and Wellbeing, Communities & Sport, said: “We are determined to maintain our position as one of the most active cities in the country, and this fantastic leisure complex will help us to do that.

“We are also funding a brand new bus station which is fit for purpose. It is much needed and will finally provide the facilities that the travelling public expect and deserve.”

Derek Phillips, Vice President of Exeter Chamber of Commerce, said: “We support this investment in the city centre and back the council’s plans to regenerate this tired and outdated site. This investment will help increase the viability of the city centre in uncertain times, and we very much welcome it.”

Earlier in the year the council announced Kier has been appointed as the preferred contractor to build the new bus station and leisure complex after a competitive tender process.

If councillors back the recommendations, it is hoped that final contracts for the main build programme will be signed in December.

St Sidwell’s Point will replace the aging Pyramids swimming pool and is expected to attract at least 500,000 visits a year – twice that of the RAMM. The state-of-the-art new leisure complex will feature an eight lane main pool and four lane pool for learners, both with moveable floors.

There is also a confidence pool, 150 station gym, soft play area, café and crèche as well as extensive health and spa facilities. Due to ultra-filtration, the pools will have exceptional water quality with minimal chemical content.

It will be the UK’s first leisure centre built to super-efficient low energy Passivhaus standards, which is expected to eventually save up to 70 per cent on annual energy costs.

The new bus station will include covered waiting and boarding areas and high quality facilities. It will replace the existing bus station, which opened in 1964.

Charter seeks to clear Exeter's streets of obstacles and clutter