It was a privilege and honour to become the 17th Lord Mayor of Exeter earlier this year. The role of Lord Mayor has given me the opportunity to uphold the long tradition of the Mayoralty in the City of Exeter and, in particular, to promote the City of Exeter through business and community activities. Also, to support local charities and community organisations and not least of all raise funds for my own chosen charity Exeter City Community Trust.

Having been in post now for seven months I can honestly say that I have met many exceptional and inspirational people. Equally a large number of organisations who have worked tirelessly to support residents who have been disadvantaged and vulnerable.

Having completed many civic events I have picked out just a few which resonate. The Passing out Parade at the Royal Marine Camp at Lympstone was moving in so many ways. Meeting the cohort of 14 Royal Marines - 272 Troop - was really quite humbling. Their back stories showed their clear determination to excel at the highest level. They were a credit to their families, their uniform and above all else, themselves. It was also moving to see so many extended families shining with such pride. If that could be ‘bottled’ what an even greater country we would have! I am proud to have been able to share with the marines such an important day. 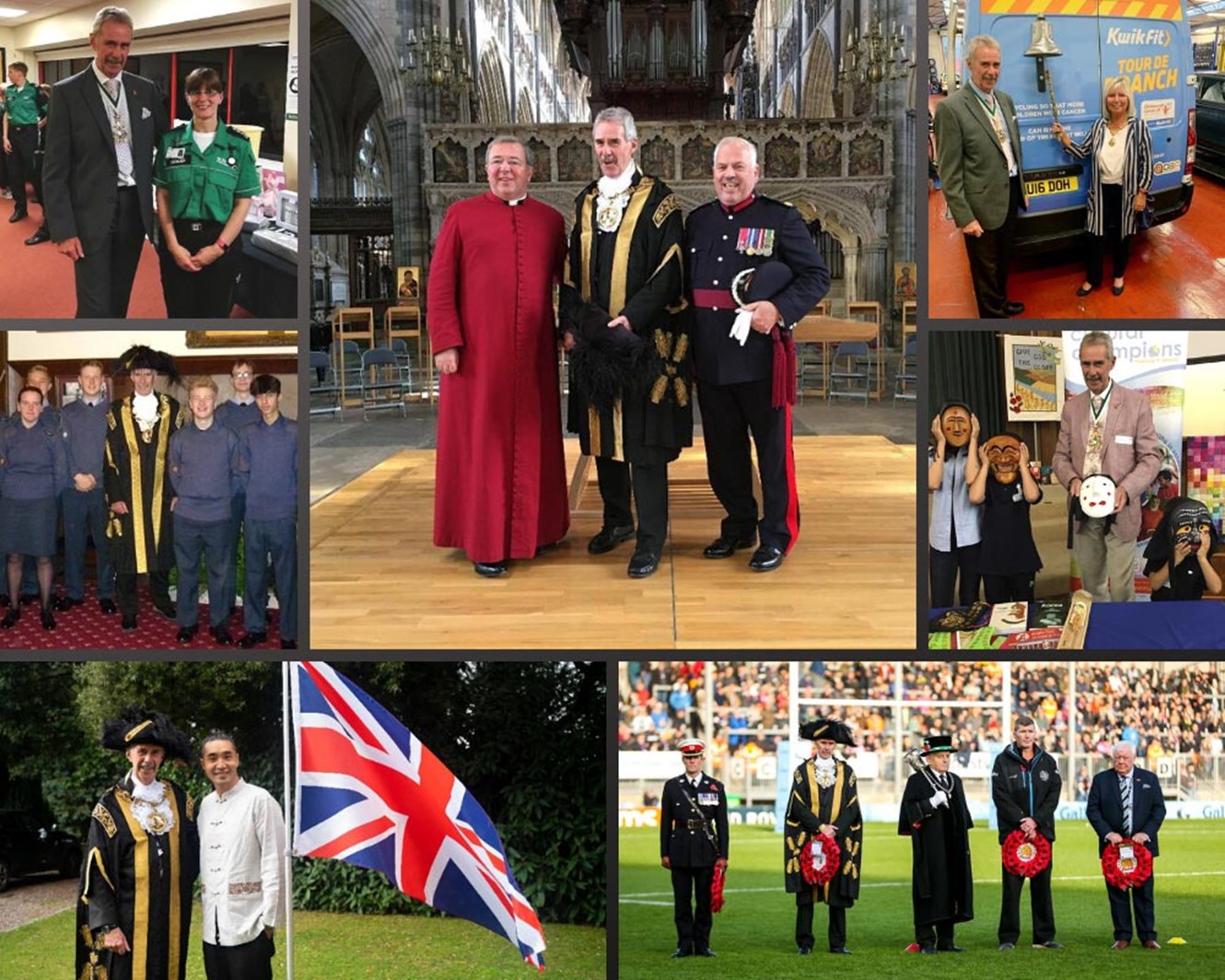 In my opening address back in May I was keen to engage with as many children and students as time allowed. I am delighted to say that I have been able to visit and share successes with ten schools to date. I particularly wish to pick out the St. John’s Hospital Educational Foundation. With so much emphasis on exam results in education these days it was refreshing to see that St. Luke’s High School, Exeter School, The Maynard and St. Peter’s High School still value the importance of extra-curricular activities including sport and, in particular, community initiatives. Awards were made to celebrate what four students, one from each school, had achieved and how the presentation became a celebration of each student’s ‘creativity’. I wish them every success in their chosen careers.

At nine o’ clock on the ninth of September we held a ceremony to celebrate the work of the Blue Light Services including the Police, Fire Brigade and Ambulance Services. It was good to meet so many people who have and continue to keep our community safe and protect us from peril.
With the City of Exeter ‘twinned’ with Bad Homburg, Terracina, Rennes and Yaroslavl, I have met delegations from our ‘cousins’ in Western Europe and learnt so much about their ‘history’ and how our relationships have blossomed and survived the test of time. Western Europe has enjoyed unbridled peace for 74 years and this must be attributed to the strong links that have been built up since the inception of the respective Twinning Associations.

My Charity this year is the City Community Trust which is Exeter’s leading health and wellbeing charity. It works in partnership with Exeter City Football Club and provides a range of activities to people of all ages, focused on health, education, wellbeing and physical activity. It delivers a range of programmes supporting some of the most vulnerable in our society, including Powerchair football for wheelchair users, sessions for deaf people and young people with Down’s Syndrome, as well as opportunities for men and women of all ages with mental health issues and learning difficulties. It also works closely with other agencies to engage people who may be hard to reach and delivers the National Citizen Service across more than 20 Devon schools and colleges. Last year 600 young people signed up for NCS in the Exeter area.

And finally, I wish to place on record my sincere thanks to those people who have made Exeter such a great place to live. Our rich history has evolved into a diverse community which is second to none.