His Royal Highness The Prince of Wales met transport workers and Exeter’s ‘Net Zero Heroes’ during a visit to the new Exeter Bus Station.

Prince Charles met long-service bus drivers and discussed their work over the pandemic during the visit to the new Exeter Bus Station, which will open to the public on Sunday 25 July.

The Prince also heard from apprentice builders and staff involved in the construction of the neighbouring St Sidwell’s Point leisure centre, which will open later this year.

He was greeted on arrival by Karime Hassan, Chief Executive of Exeter City Council, Cllr Phil Bialyk, Leader of the Council and Mike Watson, Managing Director of Stagecoach, as well as key staff involved in the development of the new bus station.

His Royal Highness met some of those involved in the City Council’s Net Zero ambition, which aims to achieve Net Zero carbon emissions by 2030. 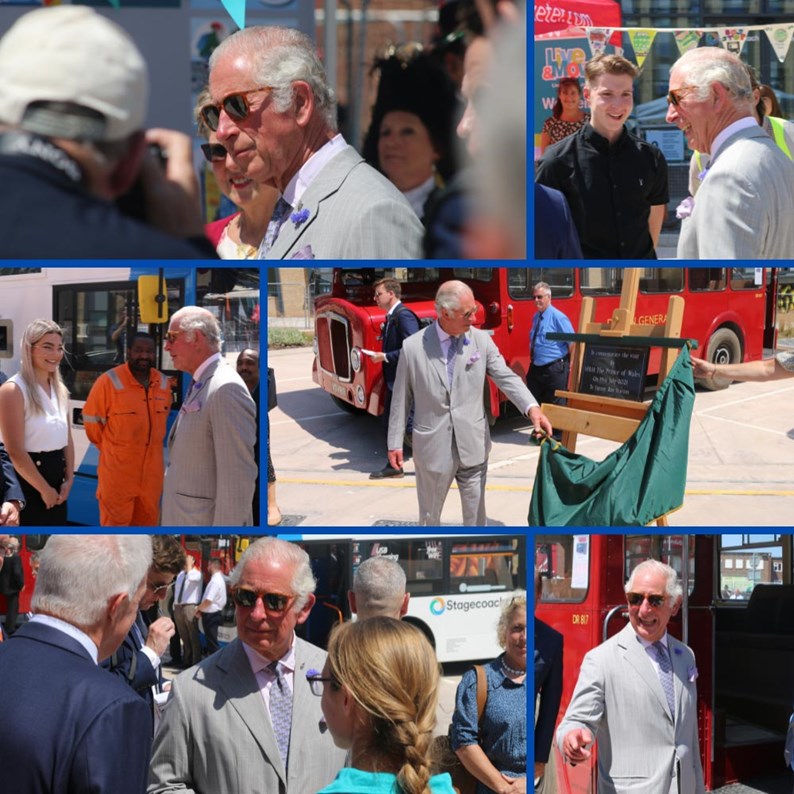 He met staff from the Live & Move Sport England pilot, which is dedicated to tackling health inequalities and supporting active travel, as well as representatives from Co-Cars, which hires out low emission cars and electric bikes across the city.

The Prince also heard about the skills development legacy of the St Sidwell’s Point project.

He heard the facility, which has been funded by the City Council, is the UK’s first Passivhaus standard ultra-low carbon leisure centre, designed to save up to 70% on annual energy consumption, and climate change proof for the next 80 years.

Prince Charles met staff from Exeter Leisure, the Council’s in-house team brought in to run the facilities as part of a city-wide approach to putting wellbeing first for residents.

Staff from constructor Kier are part of a Passivhaus Passport system which will see the skills they have learnt transferred on to other UK projects.

Stagecoach’s longest serving bus driver, Mike Prowse, who has worked for the company for almost 60 years, was introduced to the Prince and showed him a restored vintage bus, originally used in 1961, alongside Stagecoach’s latest model.

His Royal Highness unveiled a plaque to commemorate the visit before departing.

Council Leader Phil Bialyk said he was delighted with the visit. He said: “To be able to demonstrate to Prince Charles some of the things that are happening in Exeter to deliver our Net Zero 2030 aspirations was absolutely fantastic.

“He was also able to see the brand new Exeter Bus Station, which will be open next week, and our state-of-the-art low energy leisure centre St Sidwell’s Point, which will open later in the year.

“We have a great story to tell here in Exeter, and it was fantastic to be able to tell that story to the future King of England. It was an amazing day, and I am so pleased that he was able to find the time to visit us and discover more about what’s happening here in Exeter.”

The visit was organised under the banner of Exeter Live Better – putting quality of life at the heart of decisions for the people of Exeter.

In 2019, Exeter City Council declared a climate emergency and made a pledge to aim for a carbon neutral city by 2030.

In response to this bold ambition, Exeter City Futures created a clear roadmap to carbon neutrality: the Net Zero Exeter 2030 Plan, which has been officially adopted by the city.

Exeter is part of numerous connected initiatives, including delivering the largest PVC solar array in the South West and building a solar farm and battery storage facility on an inactive landfill site in the city to electrify waste operations.

Net Zero Heroes aims to celebrate local individuals, families and groups of people who are taking action on the climate and helping to deliver the city’s Net Zero Exeter 2030 Plan.

The new Exeter Bus Station replaces the dilapidated building constructed in the 1960s. This new, fit- for-purpose modern facility will promote green public transport in the city and rural communities for decades to come.

It was funded by Exeter City Council and a £800,000 grant from the LEP ‘Getting Building Fund’, and will be operated by Stagecoach South West

Torbay and Exeter launch bid to become City of Culture 2025

Seeing a doctor or going to hospital? You still need your mask