Riverside users in Exeter are enjoying a new cycle and foot bridge on a popular route into the city.

The new King’s Arms swing bridge linking Haven Banks to the Kings Arms Isthmus – land that includes footpaths and cycle paths beside the Trews Weir Flood Relief Channel – has been installed and is now open to use. 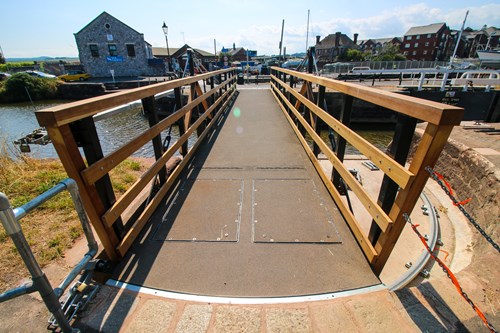 The old bridge, which was first installed in 1972, had deteriorated over time and become rotten in places.

It was lifted out last summer and replaced with a temporary structure. The new bridge is almost identical but made of steel. Metalwork from the old bridge has been used on the new structure so that it remains in keeping with its surroundings.

Cllr David Harvey, Lead Councillor for Environment and City Management, said: “The new bridge is stronger and wider and helps with our carbon free agenda, making it easier to commute on foot or by bike from the south of the city.

“This is yet another example of Exeter City Council listening to the citizens and developing and introducing new initiatives and ideas,” he added.