Exeter Chiefs legend Gareth Steenson has been granted Freedom of the City of Exeter during a ceremony at Exeter’s historic Guildhall.

The honour is in recognition of Steeno’s years of service to the club, the sport and the city.

After joining the Chiefs from the Cornish Pirates in 2008, he made 311 appearances for Exeter, winning two Premiership titles, a Champions Cup, LV=Cup and Anglo-Welsh Cup.

The fly-half, who is the club’s all-time leading points-scorer, announced his retirement last year.

During the ceremony Lord Mayor of Exeter Cllr Trish Oliver said: “In 2017 Gareth completed his Degree in Leadership & Management through the University of Northumbria. He was also granted a testimonial year by the club in the same year, where he raised funds for both Macmillan Cancer Research & the Exeter Chiefs Foundation Charities.

“In 2018 Gareth opened an Irish themed Bar & Restaurant in the City Centre known as The Stand Off for locals and visitors to the City to enjoy.

“Having now retired from the playing side of the club he continues to work with the Exeter Chiefs in a new role as kicking coach at the club.

“In his spare time he can be found on the golf course or on the side of many different local sports pitches cheering on his sport mad sons Oscar and William.

“Gareth’s wife Karen is a local GP at the Rolle Medical Partnership in Exmouth where she recently became Partner after almost 10 years with the practice. The couple married in 2012 and she has been ever present throughout Gareth’s career and time in Exeter.

“Exeter has become Gareth’s adopted home and he is delighted to be receiving this honour today.”

Gareth has been a symbol of this growth in the impact of the club, he has been an ever present presence through this period of growth and accomplishment

For commentators and fans of rugby outside of Exeter, Gareth has been the leader and character behind the team and the personification of the qualities that have made Exeter unique.

During the ceremony he said: “To receive the Freedom of the City is a huge honour for me. Exeter is my adopted home. I have been welcomed into the heart of the Exeter community which means so much to me.

“Throughout my entire career at Exeter Chiefs I have always had the full support from everyone in the Exeter community, and I feel privileged to have been part of the club’s journey over the last decade or so, and to witness the growth of the club and the impact it has had on the city. 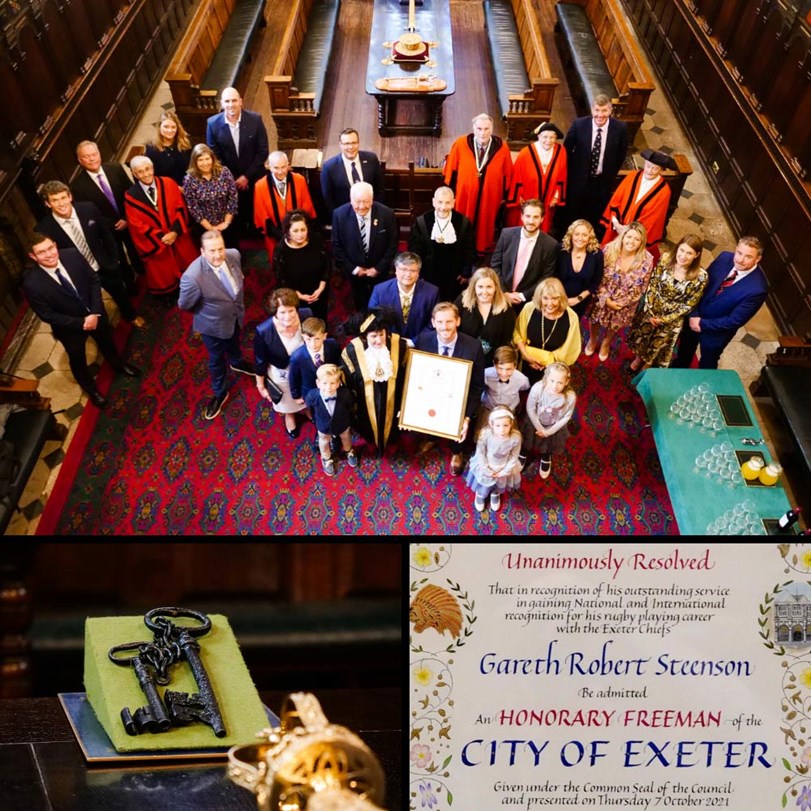 “I want to thank my friends and family for always supporting me and always believing in me.”

The Council has recognised that Exeter Chiefs have had a massive community impact in Exeter.

Since the move to Sandy Park the Club has developed an extensive academy system that is responsible for developing thousands of young people, some of whom have gone to excel at the highest level of sport including the British Lions and national representation.

Sandy Park has also become an international stadium, hosting Rugby World Cup games in 2015, as well as women’s internationals and international 7 tournaments. The influence of the club now stretches across Europe and to a global television audience.

Steeno follows Chief Executive and Chairman Tony Rowe OBE and Director of Rugby Rob Baxter in being granted Freedom of the City.